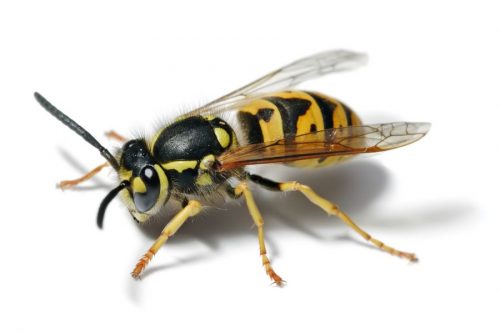 Yellow Jackets make a round paper nest either on the eve of our homes or in the ground with numbers estimated at twenty-five thousand at maturity. The queen usually starts her nest in mid-spring after emerging from hibernation. The nest is usually first noticed in midsummer as it nears maturity and the number of yellow jackets grows. They tend to become more aggressive late summer and early fall when they start producing new queens for the next year.

Yellow jackets are in a family of insects that is given the scientific name of Vespidae, which we often hear referred to as “meat bees,” due to the tendency for several of the species to try to share our hot dogs and hamburgers when we are eating outdoors. Yellow jackets are social insects, creating a nest and organized colony, with a queen to lay the eggs and workers that care for the growing larvae and forage for food for the colony. The food of the larvae, as it turns out, is meat, and in the absence of humans and our own foods that meat will be natural sources such as other insects or carcasses of dead animals. Caterpillars are a particularly good source of meat, and in this respect, these insects provide some benefit to us. However, yellow jackets also can sting, and in defense of their nests will readily go after people or pets that stray too close for them.

Call a professional pest control operator for yellow jacket removal. The European Paper Wasp looks very much like a yellow jacket, and could easily be confused with one. It is the same black and yellow color with very similar markings, but with a much more slender abdomen and somewhat narrower waist area. The nests of paper wasps also are different from those of yellow jackets. Both insects create their nest by using dried plant materials, such as bark from trees, dried flower stems, etc., working this into a mushy paper mache that they can then form into the rather beautiful nests with cells, where their larvae will live and grow. Yellow jackets always enclose the nest with an outer shell, and their colonies can become extremely large, upwards of 25,000 insects by the end of the summer if they have done well. Neither paper wasps nor yellow jackets continue the colony through the winter in areas where it gets cold, so all that work starts from scratch with a new queen creating a new colony in the spring.