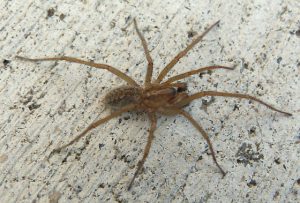 The Hobo spider, Tegenaria agrestis, is a moderately large spider of the family Agelenidae which is indigenous to Western Europe that was introduced into the northwestern United States (Port of Seattle) sometime before the 1930’s. The means of the spiders’ introduction into the United States was almost certainly commercial shipping vessels carrying cargo originating from agricultural areas of Europe.

It is highly probable that they were transported to and arrived in the Port of Seattle as egg cases attached to wood, etc., rather than as mobile organisms. Considering the seasonal nature of the hobo spider, it is highly unlikely that a viable breeding population would have developed in the United States based on the occasional introduction of adult or juvenile specimens.

The Hobo spider is native to Europe. The hobo spider is a resident of fields, rarely entering human habitations due to the presence of major competitors, particularly the giant house spider, Tegenaria gigantea, which is a common resident of houses and other man-made structures in Europe; thus, human contacts with the hobo spider are uncommon in Europe. In the United States, however, the hobo spider rapidly adapted to living in urban areas, and without the widespread presence of a dominant competitor, became abundant and began to extend its range; by 1968 it had become established as far east as Spokane, Washington and Moscow, Idaho, and as far south as Corvallis, Oregon.

In the late 1960’s and early 1970’s physicians in Idaho, Oregon and Washington were presented with cases of probable spider bite that closely resembled bites caused by the brown recluse spider, Loxosceles reclusa. Studies conducted between 1974 and 1982 suggested that another spider was probably the actual agent of these envenomations. Finally, in 1983, field studies revealed that the hobo spider was the actual cause of such bites in the northwest, and the spiders’ ability to produce necrotic lesions and systemic illness was demonstrated in the laboratory in 1986 (see Vest (1987) “Necrotic Arachnidism…” and Vest (1987) “Envenomations by…” in references for the original published research.

Recently, cases of necrotic arachnidism have begun to appear in several areas adjacent to the previously known range of the hobo spider in the United States and Canada. While still often incorrectly referred to as “brown recluse spider bite”, the systemic effects manifest in these cases are more indicative of hobo spider poisoning (tegenarism) than of brown recluse spider poisoning (Loxosceles). Such bite cases began to appear in northern and central Utah in the late 1980’s when the hobo spider was not thought to occur in that state. In August of 1993 large numbers of this species emerged in Logan and other Utah cities, putting to rest any speculation as to the principal cause of necrotic arachnidism in that area. Studies conducted at Utah State University have now confirmed that the spider has extended its range as far south as the city of Richfield, confirming a range extension of the hobo spider over 200 miles south of the previously considered southern limit.

The hobo spider is an arachnid species with a demonstrable capability of extending its range into new territories and adapting to many types of habitats. While it probably cannot readily adapt to extremely dry, xeric habitats, it adapts well to situations with adequate moisture and relatively cool climates. The southern limit of its range potential in the United States may be at approximately the 37th parallel (in Utah at least), while the limit of its range potential east may extend to the east coast. The northern limit of range potential for this species in coastal areas probably extends far beyond the current known range, as the climatic conditions in these regions are amenable to its establishment. The hobo spider may now be expected to occur in central Alberta, Canada, south and northwestern British Columbia, and coastal regions of extreme southern Alaska.

The hobo spider is now the leading cause of serious envenomations in the northwestern United States; as such, a suitable common name was needed for reference to it (no common name had been applied in Europe). The choice of a common name for this spider was difficult and proved a considerable challenge. Many common names were suggested which referred to the color of the spider (northern brown spider, brown house spider, etc.), but these were deemed unsuitable as they were too similar to the term “brown recluse spider”; Other suggested names such as aggressive house spider, killer house spider, and terminator spider were obviously more exploitive than scientifically accurate and were rejected as useable terms. One of these, aggressive house spider, was used in some early publications and received considerable press coverage in the early 1990’s, creating a mythology about this arachnid which still emerges occasionally; The aggressive house spider moniker is no longer considered acceptable for use in publications, etc., not only due to its inaccuracy, but because it perverts the spiders’ scientific name Tegenaria agrestis, which translates “mat weaver of the field”, not “aggressive mat weaver”. The name hobo spider was originally suggested by Rebecca J. Vest, a sub-investigator who helped perform the original research on the spider, its venom, and its bite. The term hobo spider was designated as the official common name of T. agrestis in July of 1994 by the Committee on Common Names of the American Archeological Society, the organ charged with officializing common names of arachnids in North America. On May 31, 1996, the hobo became the third spider to be officially placed on the venomous spider list of the Centers for Disease Control and Prevention (Atlanta, Georgia, U.S.A.).